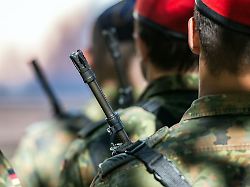 There is an increase in right-wing suspected cases in the Bundeswehr. The military intelligence agency MAD is currently reporting 478 cases, 50 more than in May. These soldiers are believed to have an anti-constitutional worldview.
Since May, the Military Shielding Service (MAD) has been working on about 50 new suspected cases of possible right-wing extremists in the Bundeswehr. As of September 4, there were 478 suspected cases, a spokesman for the Department of Defense said. As late as May, the MAD had reported to the Bundestag that 428 of these cases were being processed. In four months, 50 new cases were added. The ministry pointed out that the numbers are fluctuating and that it is an investigation. "There are cases that confirm and cases that do not confirm," the spokesman said. General attitude of the ministry to extremists is that "they have no place in the Bundeswehr, and for the Military Abschirmdienst works". The Ministry of Defense had announced that the MAD would step up its actions against potential extremists and should also be reformed. The MAD refers to soldiers as suspected cases, if there is evidence that they have a right-wing and anti-constitutional world view. The latest figures come from a response from the Ministry to the Green Party politician Konstantin von Notz, quoted by the "mirror". Von Notz spoke of a "dramatic and disturbing development". Especially against the background of German history, "these events are completely unacceptable," he said. "Worrying development in the Bundeswehr" "An increase in the extreme right suspected cases in the Bundeswehr by 50 cases within half a year shows that this is a disturbing development ", said the FDP domestic politician Benjamin Strasser. "Soldiers against whom a suspicion can be proven must be consistently removed from the force." The federal government must show a way how the Bundeswehr can become immune to right-wing extremists. The MAD is to be repositioned according to plans of the Ministry of Defense with hundreds of new posts, a structural reform and a civilian second vice-president. Burkhard Even, who was previously head of counterintelligence at the Federal Office for the Protection of the Constitution (BfV), is to take office in autumn. In the medium term, 300 to 400 new jobs are planned in military intelligence. Even is intended to advance measures that have already been initiated for better cooperation between MAD and the protection of the constitution. With the reorganization, the ministry is responding to criticism that the action against right-wing extremists in the armed forces has been too hesitant so far. The Parliamentary Control Panel, which is responsible for controlling the intelligence services, has been working for more than nine months on a report on possible right-wing networks with links to the Bundeswehr.