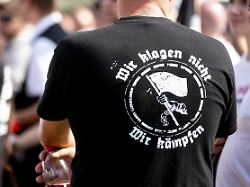 According to horseshoe theory, extremist forces on the left and right sides have more in common with each other than with the democratic center. Why does this model fall short and why can it be dangerous to hold onto it?
Horseshoe theory ranks political parties on a horseshoe-shaped scale. In this model, the extreme political margins are closer to each other than both to the center and equally distant from it. The model roughly distinguishes between moderate and extremist forces – according to the theory, some want to maintain the free and democratic basic order, while others reject the state and constitution. Political scientist and extremism researcher Hajo Funke from the Free University of Berlin explains ntv.de: "In this model, the two extreme ends of the political spectrum attract or even complement each other and move like magnets. One assumes that the right is like the left, Right-wing extremists as well as left-wing extremists and that both are for violence and against the constitutional arch of the democratic center or the democratic center. "Differences greater than similarities Among political scientists and extremism researchers, the model is widely considered outdated and too one-dimensional to describe political reality. Nevertheless, the horseshoe theory is used again and again. Funke is particularly popular in right-wing circles with a bipolar world view, explains Funke: "In Germany, it is associated, among other things, with the right-wing conservative theorist Eckhard Jesse, who argues from the Cold War understanding of the 80s and early 90s and who Right-wing extremism as well as the AfD relativized. This concept acts as if it were completely neutral, but in fact it is directed primarily against the left. It cannot grasp the differences between a pragmatic left, an extreme left and a violent left. " * Data protection Critics of the theory agree: The differences between right-wing and left-wing extremism are greater and outweigh their similarities, for example in relation to anti-constitutionalism, violence or anti-Semitism. For Hajo Funke, there is a big difference, for example, in anti-Semitism: "Today nine-tenths of right-wing extremists commit anti-Semitic crimes. If you say that there is left-wing and right-wing anti-Semitism, it is usually wrong in terms of content. Among left or extreme leftists there is It is anti-Semitism related to Israel if criticism of Israel is related to its own National Socialist history and equated with it, but criticism of human rights violations in the West Bank and the annexation plans of the right-wing government under Benjamin Netanyahu is of course not anti-Semitism for extremism researchers when it comes to violence. With regard to the situation in Thuringia around the election of Thomas Kemmerich as Prime Minister, where the Left and AfD are described as equally extremist by representatives of the CDU and FDP, it becomes clear that the camps can often not be equated: "Björn In his combat book, 'Never twice in the same river', Höcke devised a strategy of violence when he was in power, and he wanted to use 'well-tempered cruelty' to ban millions of migrants from the country. We cannot do this without extreme violence not with the pragmatic left, for example the party Die Linke. You won't find that in parts of the AfD either, at least not externally or as long as you decisively contradict Höcke or Andreas Kalbitz. That shows that even here a minimum degree of differentiation and analytical precision is important. "Horseshoe blocks political work Thuringia is the best example of this for political scientists or that the horseshoe theory cannot depict political reality. "If we follow the horseshoe assumption, we have the situation for the first time that the majority is extreme and therefore no government capable of a majority is established. That is absurd." Sticking to the theory makes political work impossible and ultimately plays into the hands of the right wing: "You can't block the executive because you nail your head through such an outdated, dogmatic assumption. Especially knowing that Bodo Ramelow is not a Stalinist is and not dangerous for democracy. As we have seen, the result is a blockade of democracy that has been systematically used and abused by the actually extreme right under Höcke with a smirking look. "Hajo Funke therefore advocates giving up block thinking and instead come to a pragmatic approach to each other. "We have to ask ourselves: What are the conditions for strengthening democracy and the rule of law? How can we succeed in being able to make decisions and act as a parliament? The hallmark of democracy is to form majorities, to make credible policies and to go public and in elections In response to the idea of ​​this dogmatism, I say: democracy and the rule of law. "