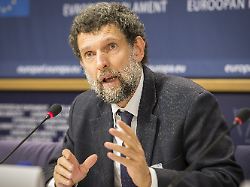 Osman Kavala has been in custody for two years. He is said to have been involved in the attempted coup in Turkey. After an acquittal, he is arrested again when he leaves the prison – and detained again.
The Turkish intellectual Osman Kavala has to go back to prison the day after his acquittal. An Istanbul court ordered remand custody of Kavala for alleged links to the 2016 coup attempt, according to court documents that the German Press Agency was able to view. The pre-trial detention was ordered because there was "strong evidence" that Kavala was involved in the decision-making process of the coup attempt be. The judge also argued that there was a risk of flight, and another court had acquitted Kavala and eight other defendants on Tuesday of charges of attempting to overthrow the government-critical Gezi protests in 2013. The court also ordered Kavala to be released after more than two years in pre-trial detention, but immediately after his release from prison, Kavala was arrested and taken to the Istanbul police department. He was then brought before a judge late Wednesday evening and Kavala was held in pre-trial detention for more than two years in Silivri maximum security prison. The European Court of Human Rights had ordered his release in December, but Turkey had failed to do so.